Home  ›  About Us  ›  Blog  ›  Changing The Direction Of Debt Collection

Changing The Direction Of Debt Collection

Debt collectors are historically an unpopular group of people. Even the Bible has shade to throw their way. (Debt collectors, Biblically speaking, share a category with adulterers, swindlers and the unjust.)

Part of that is the nature of the beast. Spending money is a good deal of fun. Repaying money is not. No one wants to hear from the entity whose job it is to send polite reminders that a bill is due — or past due. 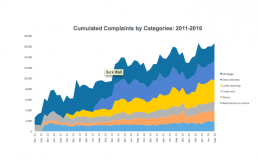 But the ill-will toward debt collection in the U.S. by the numbers is hard to explain away as a mere occupational hazard.

Debt collectors have been the second-leading major generator of consumer complaints since the Consumer Financial Protection Bureau (CFPB) added them as an area that consumers could log complaints against in June 2013. Mortgages have dominated the top spot since the database itself launched in 2012 — which is unsurprising given the CFPB was created following a crisis in mortgage underwriting.

Debt collectors managed to lose their No. 2 spot in 2017 when the credit reporting agencies (normally the No. 3 contender) secured the silver medal position. That switch, however, was mostly the result of the Equifax hack. Of the approximately 240,000 complaints logged in the CFPB database in 2017, a full 30,000 were about Equifax.

Despite that singular event, debt collectors continue to represent a huge swath of consumers complaints: One-third of all complaints in 2017 were about debt collections.

The complaints logged by consumers nationwide paints a fairly distressing picture all around.

Consumers complain about agencies hounding them day and night, threatening their relatives and harassing them at work. Complaints about debt collectors aggressively pursuing zombie debt or dragging customers through the legal system in an attempt to collection on debts that in some cases don’t actually exist also abound.

“I think no matter what direction you look at it from, debt collection in the United States is just broken. Because it takes consumers who want to pay, who could pay and turns them into customers that can’t,” noted TrueAccord CEO and Co-Founder Ohad Samet.

As an innovator looking to fix the broken system by using data as a substitute for “draconian collection methods,” Samet’s position on this issue is expected.

But it’s a position he shares with an unexpected regulatory source: CFPB Acting Director Mick Mulvaney.

Since taking over the CFPB, Acting Director Mick Mulvaney has not exactly earned a reputation for being an active or aggressive regulator — much to the anger and annoyance of many. Mulvaney has even publicly noted in a January editorial the CFPB’s days of pushing the envelope when it comes to financial regulation are over.

That sentiment has coincided with a stepped-back attitude, particularly when compared to the rather enforcement-enthused CFPB under its first director — Richard Cordray.

Unless one happens to be dealing with debt collectors.

Mulvaney has also publicly noted he sees debt collection as an enforcement priority simply by virtue of the number of complaints the CFPB gets about the industry.

“From now on, we will be working closely with the FTC [(Federal Trade Commission)] to enforce [federal debt collection laws] while protecting the legal rights of all in a manner that is efficient, effective and accountable,” Mulvaney said in a statement that accompanied the agency’s annual report on debt collection.

This partnership has drawn some complaints from Democrats, who argue the CFPB needs to act independently from the FTC. Defenders of the approach noted that through this collaboration, the FTC has secured $64 million in judgments based on alleged violations, with specific enforcement focus on those trying to forcibly collect expired (zombie) debt, according to a report recently released by the FTC and the CFPB. The same report called out multiple injunctions that will prevent serial abusers from working in debt collection going forward.

Defenders also noted that continued regulatory attention on debt collection gone amiss is in line with what Mulvaney described as a more “data-drive approach to enforcement in early 2017.”

“In 2016, almost a third of the complaints into this office related to debt collection. Only 0.9 percent related to prepaid cards and 2 percent to payday lending. Data like that should, and will, guide our actions,” Mulvaney wrote in the same Wall Street Journal opinion column where he decried pushing the regulatory envelope.

Moreover the new regulatory approach has been drawing a bit more industry support than the former — somewhat more confrontational method — favored by previous leadership at the CFPB.

A representative of ACA International, a trade association of debt collectors, told the WSJ that the organization “welcomes the news of close coordination between the CFPB and FTC. We endorse the efforts of the CFPB and the FTC to target bad actors who engage in unlawful debt collection practices.”

But, TrueAccord’s Samet noted, regulating bad actors out of the segment is only half the battle. There also needs to be better solutions in place in the market.

After falling to record lows in the post-recession landscape, consumer credit in recent years has come roaring back, hitting record levels in late 2017. That in and of itself is not a bad thing and was probably key to stimulating record consumer spending in late 2017 as well.

But, as consumer debt has risen — particularly credit card and auto loan debt — default levels have been steadily climbing along with them. And those elevating default rates have been across a few different underwriting segments: student loans (which have had high default rates for almost a decade), auto loans, private label cards, big bank issues cards, and small bank- and credit union-issued cards.

How important that dip in default will be depends on how long it goes on and whether it’s a correction of a loosening credit market or something a little more serious.

But what does seem certain is a lot more Americans have calls in their future from debt collectors, who will be pressured to do it right — or run the risk of being legislated or innovated out of the market.